On Thursday 9th June, Year 8 pupils from Lisneal College and St. Cecelia’s competed in a Shared Education event called ‘It’s a Knockout’. Pupil’s from both schools joined forces to form teams that worked together in a competitive and fun environment to participate in the full range of inflatable obstacle challenges.

The Lisneal College sports day took place yesterday on Tuesday 14th June in beautiful sunny conditions. The pupils took part in a wide range of sports including athletics, soccer, netball, team challenges and climbing. The pupils and staff had great fun and it was clear to see the team ethos we have at Lisneal. The mighty CASTLE were crowned overall champions for 2016 and boy, didn’t they savour the victory. We are currently working on a slideshow for your enjoyment, but until it’s ready here are some photos of the day. WE ARE LISNEAL. 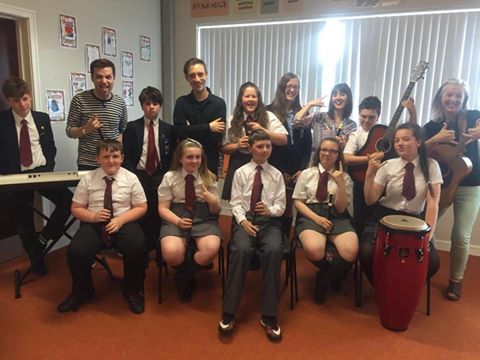 Last week 8C1 had the amazing opportunity to work with the very talented Glenn Rosborough and they recorded their very own CD (the last photo is the cover of the CD!!!) Superstars in the making! Come see them live at Lisneal’s Got Talent on Thursday 23rd at 7pm. Another proud moment for Team Lisneal!

Our Year 10 students took part in a Science event called ALL SySTEMS GO!! This event was held by the University of Ulster in their Coleraine campus and it was attended by 400 pupils from schools across the province. Our pupils took part in a range of workshops that had them designing paper rockets and launching them, creating a Skeleton cart for Barbie and carrying out a Crime Scene investigation after a murder in a Science lab.

Our pupils thoroughly enjoyed working alongside other schools and enjoyed putting their Science into action. Many thanks to the Science department for organising this amazing event.